skip to main | skip to sidebar

Apparently I've been sitting around too long with too few eyes on my projects and my girlfriend seems to think that throwing them up on the internet for all the world to see is the way to go in this modern time. So with that in mind, I took a few pictures of today's little project to share with...umm...I really don't know! I'll pretend someone's reading though, and that they're pretty interested.

My father has a very old tool chest in his house, and it's filled with my great grandfather's tools. Well - some of them. The mere fact that they've survived I feel is pretty fantastic! However, most of them are pretty rusted and in some of them are pretty far gone. Alas. I think most of this has to do with the missing lid of the tool chest - the poor things are left open to the basement air. The chest is a project for another time though.

At any rate - today I started to go through some of the contents and I pulled out 2 of his saws. Nice old things, no teeth missing, still straight, handles mostly intact ( a few cracks and one has a large chip out of it), good stuff. 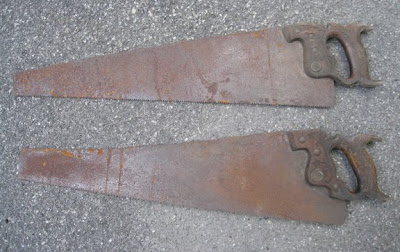 So I took 'em apart, pulled the handles off and made sure to keep all the brass hardware matched up with their mates, and laid the blades out on a piece of old plywood. Took my angle grinder and put a wire brush wheel on it and went over the blades as thoroughly as I could. I love that piece of junk - I bought the grinder for $15 from a mail order surplus catalog and I use it constantly.

Anyway - the blades cleaned up alright - there's a bit of pitting in the rustiest spots, but overall alright. I wet-sanded the blades afterward and that took off most of the carbon and leftover bits of rust the grinder missed and smoothed out the blades a bit more. Dried 'em off, rubbed car wax into them and buffed them up best they'll come.

After working some lemon oil into the wood of the handles to preserve and protect and bring out some color and shine, and rubbing a bit of brass polish into the hardware, I put some oil on the back of the blades and slid the wood back on. A little jockeying of the handles to get the brass screws back in right and they turned out pretty nice I'd say! 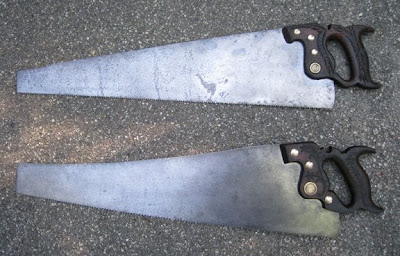 You can see the pitted areas, most especially in the top rip saw, but since they're not bubbled up above the plane of the blade, I think they should probably still work nicely once they're sharpened.

A look at the nice handle details before: 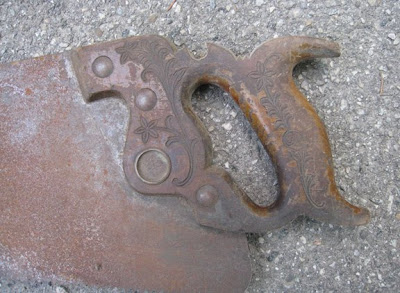 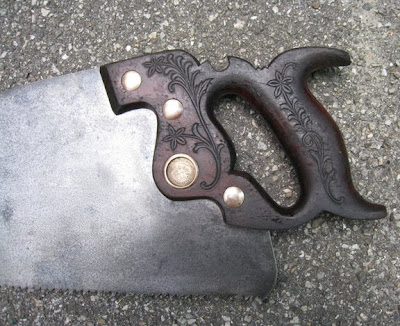 Anyway - not the world's most spectacular project, but some fairly nice results I think. I'm most especially pleased just because they're sort've heirloom tools - and that is pretty rock'n'roll in my book. I think I'm going to try to work my way though the entire tool box and salvage whatever I can out of it. I saw a very nice looking hand plane or 2 in there - I think they're next.

Til then - thanks enthusiastic and unknown viewer(s)! Much much more to come...

Whalebones
When I'm not trying to learn how to build myself a robot or 7, I can generally be found with my face in a book. And if I can't be found, then I'm probably lost in the woods someplace, dodging some bears. I'm a nerd and a half. For most of my life I've been working on this vague idea of being a kind of modern frontiersman, capable of doing...whatever...on my own, so my current interest(s) run the gamut at any given time. One day I'll have a classy old farmhouse and bunch of land where I can experiment with all hare-brained ideas I have. I'll open a bookstore there, grow some vegetables, and if I blow something up by accident...meh. ;)

These are nice places...